Welcome to my Mining City Review!

Chances are someone approached you about the business opportunity and you landed here to make sure it’s legit.

The good news is I am going to walk you through the company, products and compensation plan so you can make the right decision.

When you land on their website you will notice there is no information on who runs or owns the company.

The domain name registration on “miningcity.com” was first registered back in 2003.

The name “Prophetek” is listed as the owner and has an incomplete address in Cyprus.

Cyprus doesn’t have the greatest reputation when it come to businesses.

They really don’t have any regulations on what kind of businesses can run there so it’s usually a scammer’s choice place.

Alright, taking a looking at the “founder mining city at investment seminar” it was uploaded on the channel on May 17th, 2019.

The man speaking in that video had a think European accent and was presenting to a Vietnamese audience.

After more digging, the man being the company is founder and CEO Grzegorz Rogowski. 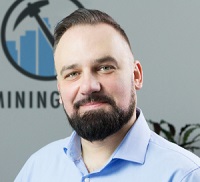 He also goes by the name Gregory Rogowski and Greg STrong.

According to LinkedIn he is based out of Poland.

This is probably where the real location of Mining City is operating from.

Right now it seems the company is targeting mostly Asia where most of the traffic coming to the website is from Japan, South Korea and Vietnam.

So a company that is apparently from Cyprus, but the owner is in Poland and targeting Asia…

Alright let’s take a look at the products next.

In order for any network marketing company to be legit, it has to have more than 50% of it’s sales from actual retail products or services.

Mining City has no retail offerings at all…

All you can do is become an affiliate and promote their affiliate membership.

Another company I reviewed that was very similar was Forsage.

Mining City member invest money into the company on a promise they will get a ROI over 1100 days.

Overall the company has five ranks you can achieve.

Below is the qualifications needed to hit each rank:

Basically when you sponsor someone they are placed under you.

Once your affiliate sponsors someone, they are placed on your level 2 and so on.

This hybrid compensation plan pays a Mining City affiliate 5% of the invested funds on their first five sponsored members.

From the sixth onwards you get paid 10%.

Also from the six sponsored affiliate the unilevel team starts and you can earn on many different levels:

If you don’t qualify for some reason, the 5% is passed to the next upline who is qualified to earn it.

Now I believe the actual investments are made in bitcoin even though it’s quoted in USD.

So the question is…

Does the Mining City scam exist?

Let’s just look at the facts…

Mining City is offering cloud mining and promise a return on investment.

Because of that they are offering securities…

Nothing wrong with that, but pay attention now…

Securities in Poland are regulated by the Polish Financial Supervision Authority.

In Japan, it’s the Securities Exchange Surveillance Commission which is part of the FSA.

When you take a look at South Korea, it’s regulated by the Financial Services Commission and in Vietnam it’s the State Securities Commission.

When I checked to see if this company is registered in any of those countries because they are definitely operating there, there was nothing…

In other words, they are offering illegal securities and there is only ONE reason why a company would do that…

They are not actually making their external income through cloud mining…

What is happening is newly invested funds are paying off existing members.

Once recruitment slows down, they ROI’s will starve and will trigger the company to go under.

Which is pretty common in the cryptocurrency passive income opportunities.

Now they do claim they are partnered with third party companies like BTC.com and MineBest.

Prophetek Ltd. – the operator of Mining City is proud to announce that we have procured most valued services of MineBest Sp. z o.o. as our mining provider.

MineBest will be constructing an entire set of mining containers for exclusive use of MiningCity in Kazakhstan.

We will be posting information about the construction and the equipment on our social media channels.

But just saying it doesn’t mean anything…

They do their own third party audits to see if the company is going smooth.

Even if they are really mining, they still need to register period.

Anyway, I personally can’t recommend this company because as of right now it’s operating as a pyramid scheme (no retail products) and ponzi scheme.

I hope you enjoyed my Mining City review and if you have ANY questions feel free to ask in the comments below and I will get back to you as soon as I can.